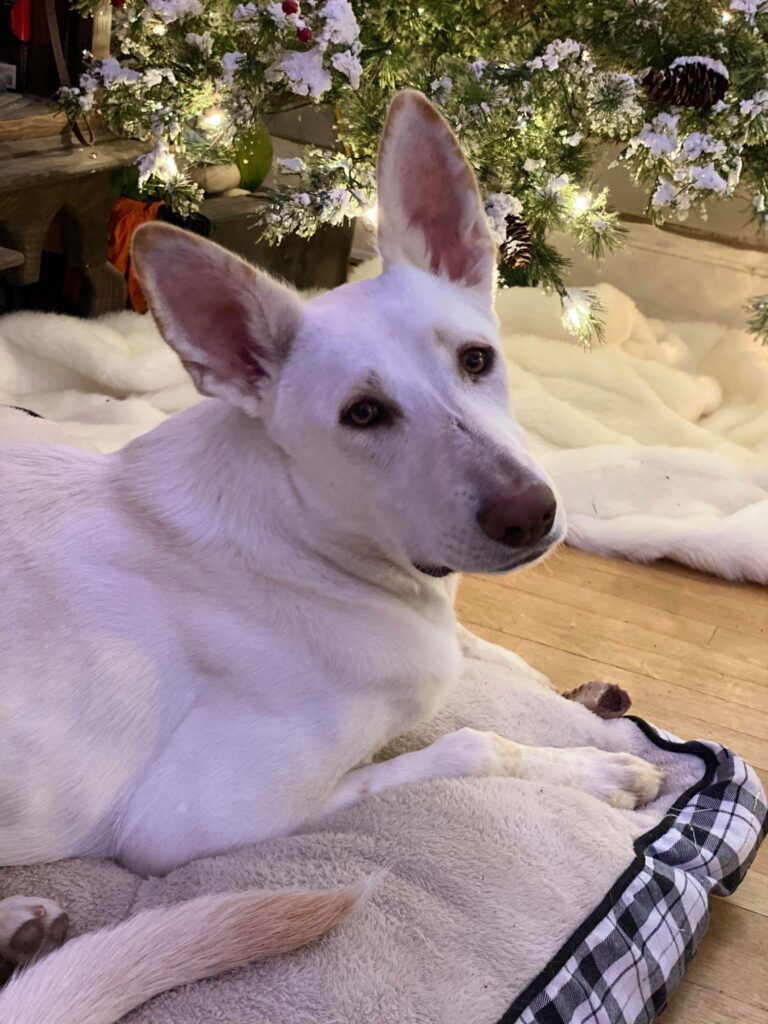 My day was like any other, scrolling through Facebook to pass the time. A video posted by PAWS featured a sweet German Shepherd named Mischka who was described as having “special needs.” I was immediately obsessed with her. After a short conversation with my husband, we agreed there were too many unknowns, and we didn’t truly need another pet. For the next week, I couldn’t stop thinking of her. After another conversation and some help convincing with my daughter, he finally agreed.

Mischka had come into the shelter with an unknown eating condition and was malnourished and desperate for help. After two vet visits there had only been speculation of what her condition could be. Our vet quickly diagnosed her with Megaesophagus after performing x-rays.

Megaesophagus is a generalized enlargement of the esophagus– a muscular tube connecting the throat to the stomach — with a decreased to absent motility. Esophageal motility is required for moving food and liquid down to the stomach. (http://www.leadervet.com/media/what-is-megaesophagus)

Basically, food gets trapped in the esophagus, causing regurgitation or vomiting, leaving the dog with no nutrition absorbed. Regurgitation increases the risk for Aspiration Pneumonia, also known as AP. In Megaesophagus dogs, this is the number one risk as the onset and decline are often rapid. The second risk is malnutrition. When food doesn’t reach the stomach, vital nutrients are not being absorbed.

In most cases, Megaesophagus is manageable, and in rare cases, treatable, depending on the type. Mischka has the congenital form, meaning she was born with it. Her esophagus is quite large, and there is no surgical option.  Other types such as PRAA (Persistent Right Aortic Arch) is a form where corrective surgery is often the treatment. Megaesophagus can also be an acquired disease as a result of Myesthenia Gravis or other conditions.

What does this mean for you and your canine companion? Simply put, you need patience and determination. Megaesophagus dogs must be fed upright. Whether that be on a stool, stairs or chair, the force of gravity is needed. For those with extreme forms of megaesophagus, the Bailey chair is a must. The Bailey chair looks like a high chair for dogs, and for small dogs, a regular high chair is used. The dog sits on their hind legs while their front legs are supported by a tray. Additional upright time post feeding is also a must for most dogs.

Food can be anything from a blended mix of food and water and other supplements, to meatballs. This is where your patience comes in, as it will take trial and error to find what is right for your dog. Drinking water from a bowl is often not tolerated so Knox Blox, a gelatin-based form of water, adding water in their food, elevating the water, or even feeding ice cubes are possible ways to provide proper hydration.

Mischka eats blended meals from a puzzle slow feeder bowl several times a day and stands with her front legs on a dining room chair. When she was first adopted, Mischka was fed on a set of stairs, but as she has grown, her elevated stance has increased. For extra calories, fresh goat milk and canned food with high kcals are added to her food.

There are needed medications for this condition. As you can imagine, when food is trapped in your esophagus, acid levels rise, increasing nausea. This is treated with antacids. Mischka is on 10mg twice a day of Omeprozole. Another medication that is a game changer for a lot of dogs with this condition is Sildenfil. It relaxes the sphincter between the esophagus and stomach, allowing food to pass easily. Since starting Mischka on Sildenfil, she can now tolerate soaked kibble and some water.

There are other supplements and medications to aid in the treatment of megaesophagus, but each dog is different. Finding a knowledgeable vet is key to your success. Another useful resource is the Upright Canine Brigade, which has a website and Facebook group dedicated to the success of these dogs.

When we adopted Mischka, she was approximately six months old and weighed forty pounds. Now, almost four months later, she is spayed and weighs over fifty pounds. While she may always be on the leaner side, she is continuing to gain weight and thriving.

My husband is just as smitten with her as anyone who meets her is. Our veterinary clinic loves her and has gotten to know her so well that when we could finally get her spayed, they tattooed a small heart on her belly.

–Chantell Reid is a writer, photographer, and animal lover, living in Pendleton, Oregon.